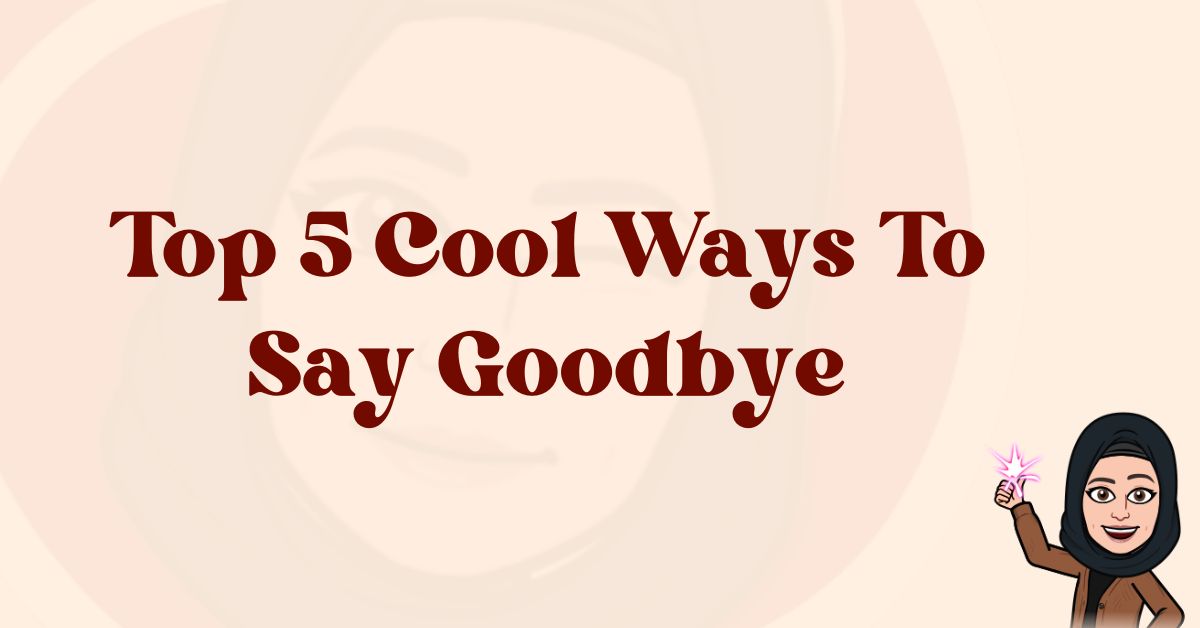 What are some ways to say goodbye in English?

We all are very much familiar with this sentence, aren’t we? I’d take that awkward gasp for a yes. With all due respect, the above-mentioned statement is the most overused goodbye sentence ever in the history of bidding farewells.

So here are a few ways in which you could conversations:

So, let’s talk about some cool ways to say goodbye in English and stop repeating the same expressions over and over. It’s very important to try new expressions and phrases every day to sound more native and smart in our daily conversations:

Have a good day/weekend/evening/holiday etc is usually used in work situations where you aren’t close to the person and want to end the conversation on formal terms without having sounded rude at the same time.

Take care. This term brings out positive emotions that you carry for the person. Don’t use it on somebody you publicly don’t like though. It comes off rude.

For all the love you would want to shower on your friends and close ones, here are a few tips:

Ciao/see you later/ see you!

The shorter you make this, the more informal it sounds.

You say this when you are saying bye to a person for a really short time and also to your absolutely closest friends as they don’t require much of a formality in these gestures.

Was nice to meet you

This is usually used when you don’t expect to see this acquaintance anytime soon again. It may sound rude, but trust me it isn’t.

Here are a bunch of random slangs that you could use casually to sound cool. *wink.

Don’t use these in your workplace, it would be inappropriate but try them out and find out which works best with your circle of friends.

This essentially means relax. Similar to take care, but a lot more informal as you can see. It is used amongst friends and not to elders.

This brings us to the point where you are no longer a Bore with saying goodbyes. You are a genius. “It’s not me, it is you.”

A summarized list of cool ways to say goodbye in English:

Make sure to take the quiz at the end of this article about the use of some and any to improve your grammar and to test your understanding of this topic. Don’t forget to share your score in the comment section below.

Insert some or any, making the appropriate compounds if

You can try other quizzes here.

Trending
QUIZ 40: Other, Others & Another

We use cookies on our website to give you the most relevant experience by remembering your preferences and repeat visits. By clicking “Accept All”, you consent to the use of ALL the cookies. However, you may visit "Cookie Settings" to provide a controlled consent.
Cookie SettingsAccept All
Manage consent

This website uses cookies to improve your experience while you navigate through the website. Out of these, the cookies that are categorized as necessary are stored on your browser as they are essential for the working of basic functionalities of the website. We also use third-party cookies that help us analyze and understand how you use this website. These cookies will be stored in your browser only with your consent. You also have the option to opt-out of these cookies. But opting out of some of these cookies may affect your browsing experience.
Necessary Always Enabled
Necessary cookies are absolutely essential for the website to function properly. This category only includes cookies that ensures basic functionalities and security features of the website. These cookies do not store any personal information.
Non-necessary
Any cookies that may not be particularly necessary for the website to function and is used specifically to collect user personal data via analytics, ads, other embedded contents are termed as non-necessary cookies. It is mandatory to procure user consent prior to running these cookies on your website.
SAVE & ACCEPT